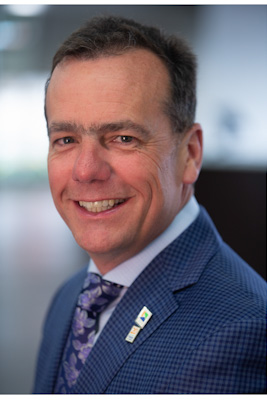 Thomas Fox AACI, P. App was elected President of AIC in June, 2019.  Thomas started in the family business working for his father Terry in 1996 and assumed leadership of the company when Terry semi-retired in 2007.  In 2017, Thomas also became a Managing Partner of Verra Group Valuations.  With more than 20 years in the valuation profession, Thomas continues to operate his firm, Fox Appraisals in Regina, Saskatchewan where he specializes in residential, multi-family, commercial and industrial properties. Thomas earned his AACI in 2006 and has a wealth of volunteer experience in his profession and with the Institute. In June 2015 Thomas was elected as Vice President of Appraisal Institute of Canada (AIC). As well as serving on AIC’s Board of Directors, Thomas has volunteered on the Work Product Reviewer Committee, has Co-Chaired AIC’s Professional Practice Committee and has Chaired the Audit and Finance Committee. At the provincial level he has been Provincial President for two terms. He also chaired Saskatchewan’s Professional Development Committee as well as their Marketing Committee.