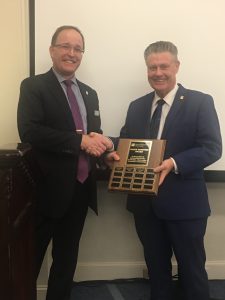 The KEITH GOODWIN AWARD is presented annually by AIC-BC to recognize a designated member for outstanding service, leadership, achievement, education, or mentoring. The award is named after AIC-BC’s past Provincial

and National president, Keith Goodwin, who personifies these attributes.

The 2019 Keith Goodwin Award was presented to Dan Jones, AACI, P.App by AIC-BC President, Graham Held, AACI, P.App at the AIC-BC Annual General Meeting in Vancouver, BC on October 17th, 2019.

Dan is President, CEO, and Managing Director of Campbell & Pound Real Estate Appraisers.  He has been an Appraisal Institute of Canada (AIC) member since December 1973, and became a designated CRA, P.App in June 1983 and an AACI, P.App in December 1986.  Dan has held many volunteer roles with the AIC-BC, including AIC-BC President in 2006 – 2007.  Dan has been an active volunteer at all levels within the AIC.  He has been a member of and contributed to regional, Provincial, and National committees, and has also been a long-standing volunteer of the AIC-BC Board of Examiners (Professional Competency Interview Panel). He most recently served as the British Columbia National Board Liaison on the AIC Board of Directors for three consecutive two-year terms and was part of several National committees and initiatives.  Congratulations, Dan!